In February 2010, the famous Montblanc Company withdrew the sale in India of their luxury Mahatma Gandhi pen, priced at Rs 14 lakh a piece. Good sense and the threat of legal action had prevailed, for the Swiss producers were in clear violation of the Emblems and Names (Prevention of Improper Use) Act, 1950, which, incidentally, brought “the name or pictorial representation of Mahatma Gandhi” within its ambit only in 1959. The company, whose trademark Montblanc pens stick demonstrably out of the pockets of our elite countrymen, were clearly appealing to the vanity of the super rich: with a little pressure of the writing finger, blue or black ink would flow literally through a small opening in the left shoulder of a stenciled image of a gold-plated Walking Gandhi. At the other end, in 1921, a Gandhi rubber stamp, with customised name and address, was on offer for Rs 3.50, quite high for its time, as letterhead for the District Congress Committees that were spearheading the Gandhi-led Non-cooperation Movement. Over the years, Gandhi image-making has indeed seen its highs and lows. Sumathi Ramaswamy, a historian of prints and images, visual history as it is called in the trade, has now put together a magnificent book of paintings, sculptures and artworks on and about Gandhi. Assembled here are artistic creations and commentaries on both the Mahatma and us inheritors of the nation that he forged into being, made unrecognisable by the violence of Partition riots. Some of our most innovative artists, past and present, are showcased here. Gandhi in the Gallery is not the usual glossy catalogue, with brief captions, dates and names of the artists that we find in art galleries and museums. Ramaswamy has on offer a virtual feast for the eye and the mind, and something more in addition. She has coupled the images of the artists with Gandhi’s own thoughts and words. The editor has trawled through the hundred volumes of his Collected Works (counting the Index) to cull appropriate quotations to help readers’ eyes travel from image to text and back. Instead of capturing Gandhi from an indifferent childhood to his epochal martyrdom/ assassination, the book focuses on the artworks connected with the different facets of his life, the dress, or the lack of it, his walks, his fasts, and detailed commentaries on all these by Gandhi himself. 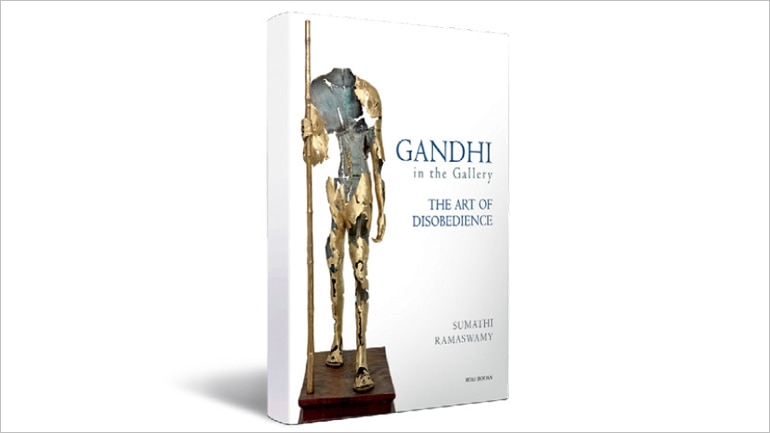 Our eyes have got so fixated on the imagery of the “loin cloth”, the “half-naked fakir” of Churchill’s scornful jibe, that Gandhi-the-sparsely-clad has become a well-meaning cliche. Gandhi had won a famous victory for the Champaran peasants fully clad in his Gujarati attire, and without the lathi. A woodcut print by Lalit Mohan Sen, ‘Mahatma Gandhi, c. 1922’ portrays him at the time of ‘Chauri Chaura’, unrecognisable as the Mahatma he had already become.

The “loin cloth”, despite Gandhi’s own description, cautions Ramswamy, was a shortened dhoti, and not the sadhu/ pahelwan non-attire, though, arguably, it did denote celibacy. Atul Dodiya’s ‘Sea-Bath (Before Breaking the Salt Law)’, painted in 1998, portraying Gandhi in conversation with his Dandi march associates clad only in a langot, might scandalise us, but it is an artist’s representation of a well-known photograph taken on April 6, 1930, the day he scooped up a fistful of salt in defiance of the law and the authority of the Raj. Or look at Ramkinkar Baij’s ‘Dandi March-II’. Modelled first in plaster of paris and cast later in bronze, here Gandhi’s lathi, his feet, as well as a downcast head seem frozen stiff. Comments Ramaswamy: “The memory of the Mahatma’s lonely walk on bare feet in Noakhali likely haunted Baij, as did the fact that the pair of walking feet had been stilled forever by 1948.”

Gandhi in the Gallery is not confined to picturing Gandhi and his times; it is equally about the Mahatma’s prized possessions. In ‘Gandhi and His Things’, the great Gandhian Haku Shah paints the iconic dhoti-watch, Gandhi wore no pockets, his glasses, spun yarn and leather sandals that he proudly crafted himself, arraying these casually in a swirling sea of green and yellow. Gandhi’s watch which is stuck forever at 5.17 pm, registers its presence in several other artworks as well. Pore carefully over the beautifully studded panorama, ‘Ahmedabad, the City Gandhi left Behind’, by the master artist Gulam Mohammed Sheikh, and you will find the watch along with Gandhi’s eating bowl in the bottom middle.

Gandhi was assassinated at 5.17 pm on Tees January Marg (then Albuquerque Road). Growing up in the 1960s, we “midnight’s children” knew only of the two minutes at 11 o’clock on that day when we all stood up in our classes to remember briefly Gandhiji and his life. Even if incongruous, a community of purpose got created. Condoling 5.17 pm over evening cups of tea with our parents, individually in our own homes, would have, I now think, fractured our teenage solidarity with the Mahatma who literally came before our time.

A former Professor of History at Delhi University, Shahid Amin is the author of Event, Metaphor, Memory: Chauri Chaura, 1922-1992