British chef Marco Pierre White is a well-known name in the industry. A celebrated chef, author, restaurateur and culinary whiz – Marco Pierre was the youngest chef to be awarded three Michelin stars at the mere age of 33. The celebrity chef regularly shares recipes and cooking tips for his 228k strong Instagram following. However, one video that he shared has caught the attention of social media users. Chef Marco Pierre shared a video tutorial of how to crack eggs. Prima facie, a chef teaching his followers how to crack eggs does not appear to be something out of the ordinary. However, the video clip will make you understand why the internet is confused about it. Take a look:

The 2-minute, 35-second clip was shared on IGTV on chef’s official handle, which enjoys a huge fan following. The post shared by Marco Pierre White has been viewed over 74k times on Instagram.

The video begins by the chef sliding up his sleeves and picking a brown egg out of a crate placed before him. Two gentle taps on the table, and the egg is ready to be poured into a glass bowl. After emptying the egg entirely, chef Marco proceeds to patiently place the two eggshell halves on a plate next to him. We see multiple repetitions of the same action, with all the empty eggshells being neatly and carefully arranged in a stack. This is basically all that we saw in the entire video clip, with chef rolling back his sleeves and folding his hands on completing the tutorial.

Puzzled, aren’t you? Instagram users were too, as they viewed the video clip by chef. While some found the video ‘mesmerising’ and ‘relaxing’, others could not understand the purpose or logic behind it. “You doing okay mate,” questioned one user in the comments section while another dryly remarked, “Lockdown got to Marco.” 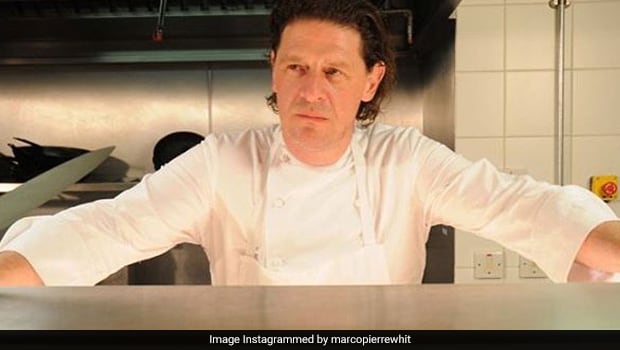 Chef Marco Pierre has also made numerous visits to India.

The egg cracking tutorial was one of many such videos on Chef Marco Pierre’s Instagram handle. He shared a few videos where he could be seen “Waiting for lunch” with ducks passing by him. A few users also pointed out how these seemingly mundane videos could actually be a comic and performative tribute to pop artist Andy Warhol. The original theory behind Warhol’s videos is about capturing the phenomenon of how most people place celebrities on a pedestal. This then gives rise to a strange desire to keep viewing even the most boring of their activities, if given a chance to do so.

What were your thoughts about the chef’s video? Tell us in the comments below!