Finally in 2021 we’re seeing an overwhelming number of new models launching in India and the 2021 Mercedes-Benz GLC was one we had our eyes on. Well, it’s not only us! Even Mercedes-Benz was keen on launching the GLC in India for the sheer volume driver it’s been for the German brand. The company has sold over 8400 units of the GLC since its launch in India in 2016 and last year it stood out to be the bestselling SUV in its portfolio. And with the new update, the GLC is likely to build up on those numbers. 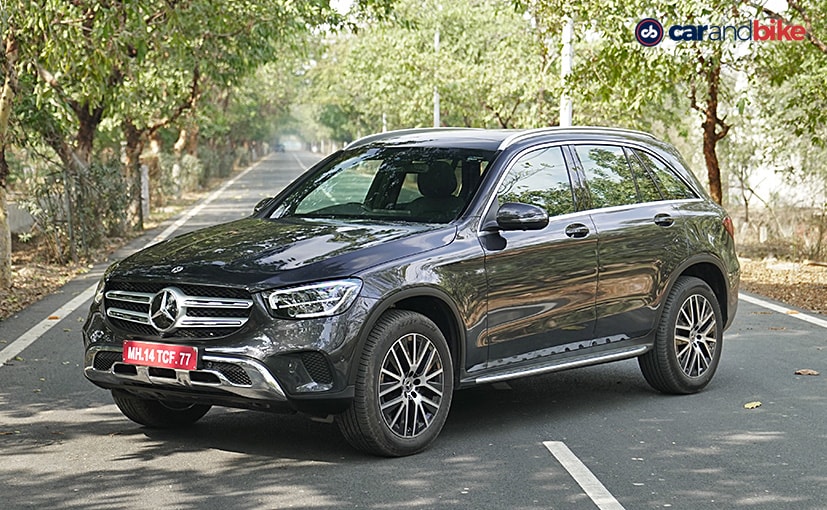 The 2021 Mercedes-Benz GLC gets new LED headlights and a beefier front end with bolder chrome inserts and revised grille.


So it’s a mid-life update for the new GLC and the proportions have not changed which is actually good because we have liked it this way. It is very suitable for urban jungle and city commute and even out on the highway it shows its size, doesn’t look small at all. 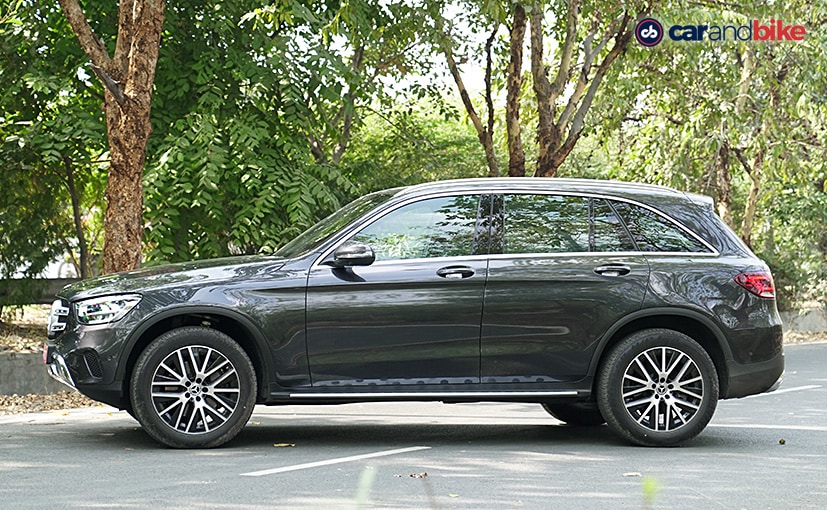 But there are new elements as well like the high performance LED headlights and the face itself looks beefier thanks to the revised bumper which come with a long bash plate and chrome treatment. And then there is the new two-slat Mercedes-Benz Grille as well. 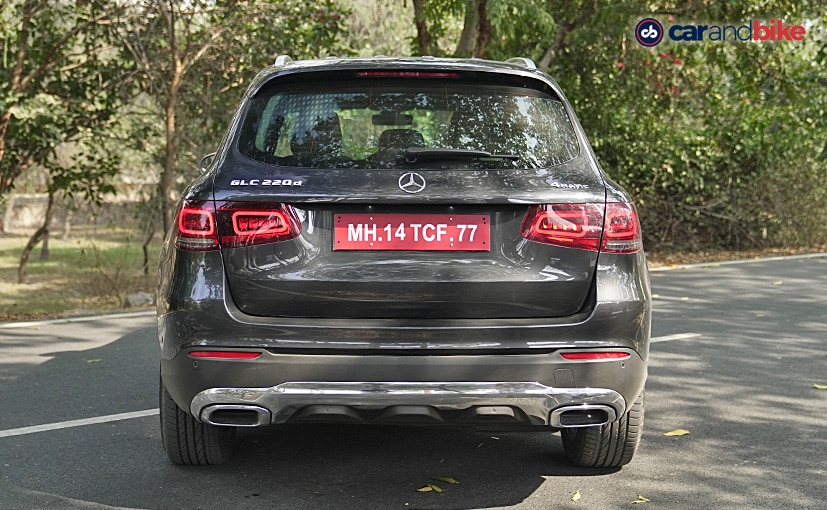 At the rear, it gets new LED taillights and a revised bumper with bolder chrome strip.

But the changes along the sides and rear are limited to just a new set of 19-inch alloy wheels, new LED taillights and bolder chrome strip on the rear bumper. 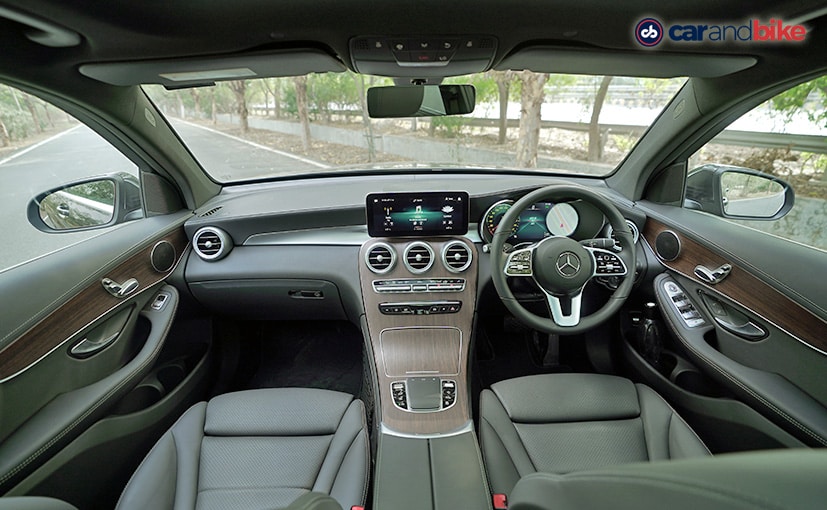 On the inside, the new Mercedes-Benz GLC is offered with an all black cabin.

Even on the inside the GLC doesn’t feel small. But the sense of space is a bit compromised in this new all-black cabin. That said, the dual-tone black and beige treatment continues as an option but in our opinion the finesse of this black cabin is a notch up. Now everything else, from the layout to the overall finish remains untouched and you also get same the wood inlays and chrome inserts on the dash. But there has been a substantial upgrade in the features department, so let’s get straight to that. 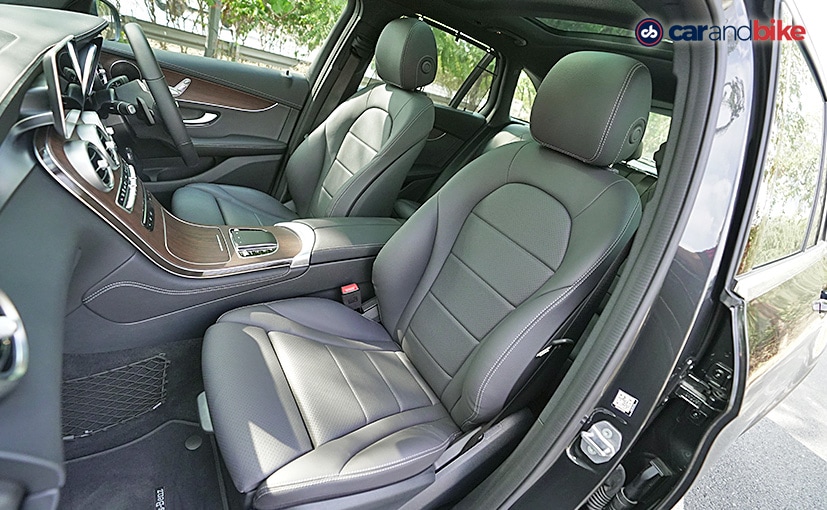 The new Mercedes-Benz GLC is equipped with front ventilated seats.

Yes! The biggest update inside this cabin is actually the addition of all new creature comforts. The most significant of them all are the front seats that come with massage function. Then the outgoing model had a normal screen but this one gets a new 10-inch MBUX touchscreen infotainment along with the touchpad controller. And the new screen is offered with multiple features and new ones. For instance, it gets Google and Alexa voice command system with home device compatibility and offers Android Auto and Apple CarPlay. Of Course! You do get the Mercedes Me connected car tech with an array of functions including, live traffic, geo-fencing, vehicle tracking and voice guidance among others. 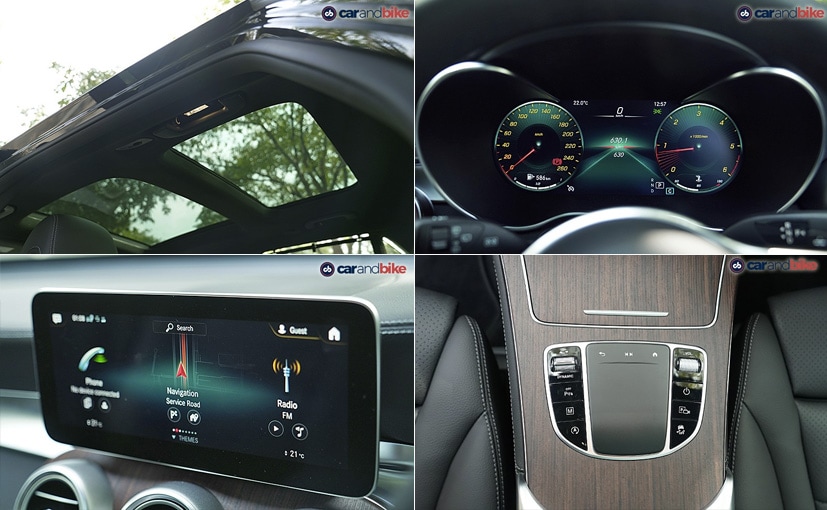 The new Mercedes-Benz GLC also gets a 10.0-inch touchscreen, 12.3-inch digital instrument panel and the ‘Mercedes Me’ connected car tech.

The instrument panel too is a new 12.3-inch unit with super sharp graphics. It looks really sporty and you get all the information here and the tachometer can also double up as navigation or info screen. Having everything right in front is actually good for hassle free driving. Then there are touch sensitive buttons on the steering wheel to toggle all the function on these screens. Other additions include a 360-degree surround view camera with park assist, C-Type charging ports and remote engine start to pre-cool the cabin. Features like powered front seats and wing mirrors, auto dimming rear view mirrors, two-zone climate control, panoramic sunroof, wireless charger and more remain. 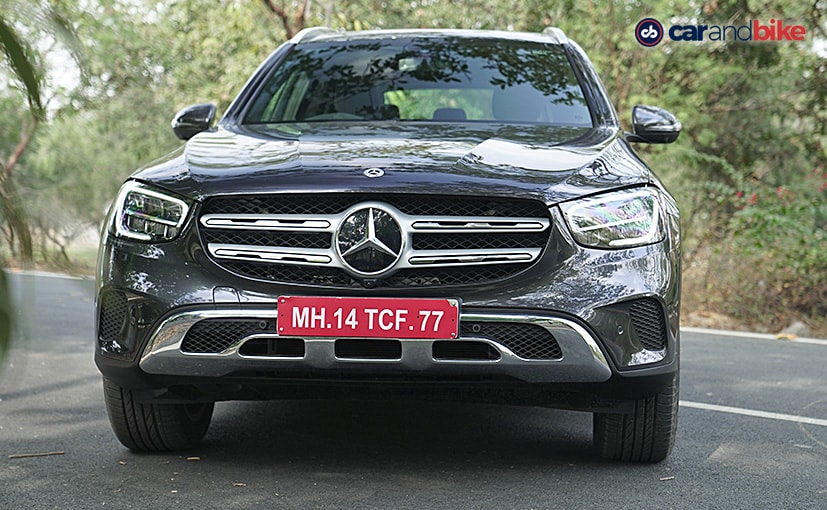 The new Mercedes-Benz GLC is offered with both petrol and diesel engines. 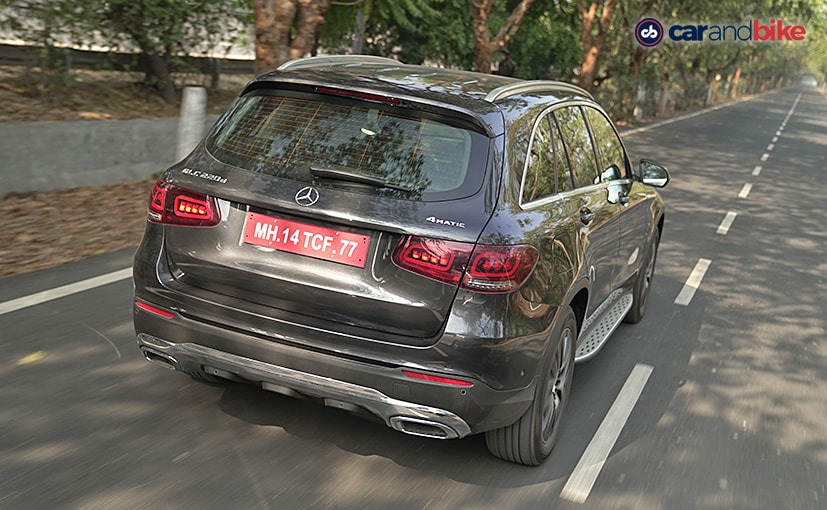 The Mercedes-Benz GLC is one of the easiest SUVs to drive.

Just as you get going, you’re greeted with an instant surge of torque which is reassuring for overtaking manoeuvres or when you tend to quickly get past the traffic. Then towards mid-range the power delivery gets linear making it an effortless cruiser out on the open roads or highways and relaxed driving is a breeze in this one. Really easy to drive!  When you’re driving in a spirited manner, there is a small hitch from the gearbox in initial shifts, but that’s trivial. The shifts are more even than quick and you don’t feel the head nod. Now the engine does get a bit aggressive in Sport mode and that is more perceptible at higher triple-digit speeds, where gear shits are relatively sharper and there’s always some power in reserve for that extra push on the pedal. 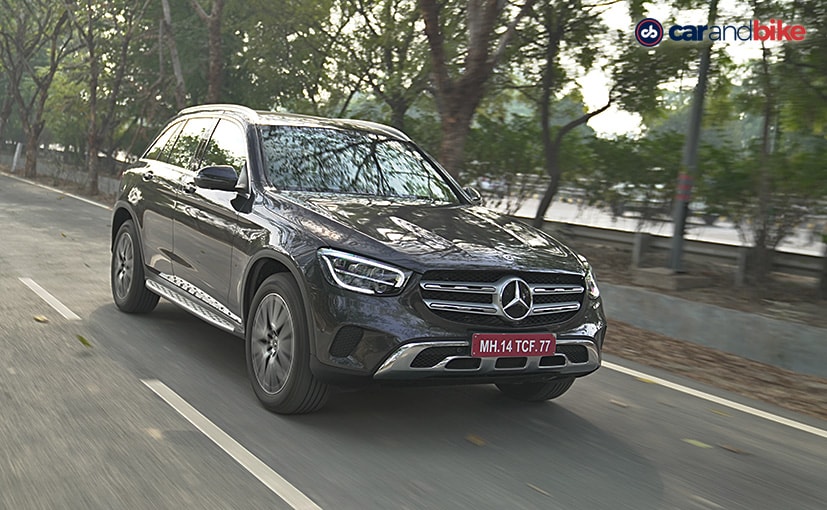 The Mercedes-Benz GLC offers the best balance of ride and handling without feeling too tort or unsettled.

Ride quality is GLC’s core strength. Period! We won’t be wrong in saying that this one still offers the best balance of ride and handling and at no point leaves you or the passengers unnerved. It’s just got it. Especially with the suspension setup because this thing just smothers over everything on the road, really glides through them and you don’t hear it. What really impresses that at lower speeds it retains enough cushioning, courtesy to the dampers and when you encounter a pothole or rough patch at higher speeds, it still feels settled and at calm. 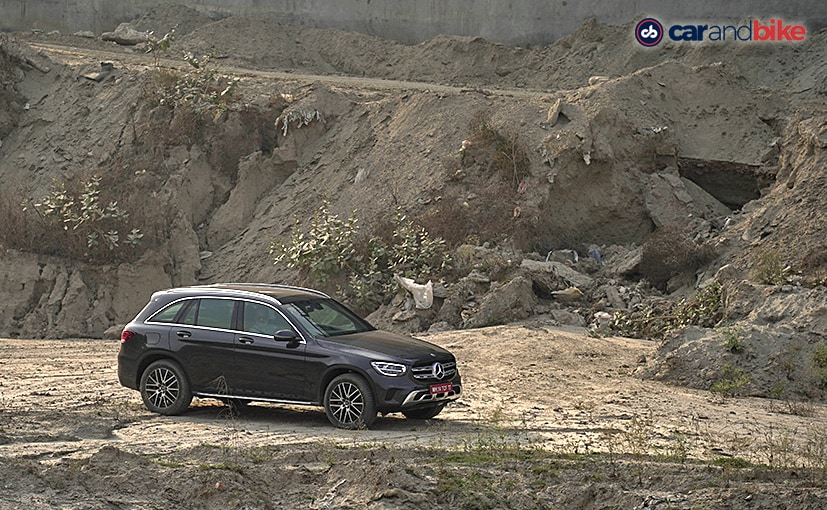 The suspension absorbs bumps pretty well and you barely hear that thud.

And it holds on to its fortes even in the handling department. The steering geometry supports spirited driving. It’s very well weighed up at higher speeds and you feel connected. Just that at lower speeds when you’re driving in the city, ambling around, it feels cumbersome. We would have liked it to be a little light over there and for city driving it’s better to keep the steering setup in comfort mode using individual settings. But yes! For spirited manner, you’re able to hold it, point its nose in the right direction and the car pretty much responses to your inputs. 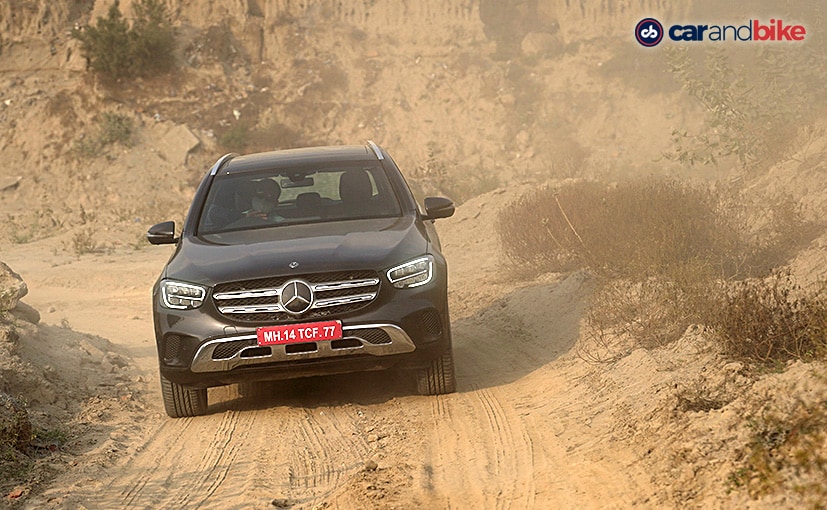 It is capable enough to take on rough surfaces we encounter generally, but it’s a crossover and not a hardcore SUV.

Before anything, remember that it’s essentially a crossover and not a hard core SUV. The 4Matic system is a rear biased all-wheel-drive (AWD) system that works in tandem with the electronics and Traction Control (TC) has a crucial role to play. It just cuts the wheel spin on sensing a sticky situation. So yes! It does take precautions for you but the flip side is, you can’t really take the risk even if you want and that despite turning off the TC. But that’s only for extreme situation and absurd angles. To take on the rough that we generally encounter, it’s well capable and can in fact be a prancing deer in the dust. The approach and departure angles too can tackle some uneven surfaces, but you’ll scrape its belly over something too sharp or protruding. The new Mercedes-Benz GLC rivals the likes of the BMW X3 and Audi Q5 among others.

So the GLC 200 petrol is priced from ₹ 57.40 lakh, while the diesel 220d variant is available at ₹ 63.15 lakh (all prices, ex-showroom India). The 2021 Mercedes-Benz GLC continues rivalling the likes of the BMW X3 that’s still going strong and has prices starting from ₹ 56.50 lakh and the new Audi Q5 Facelift that looks really sporty and is expected heat up the segment on its arrival this year.

The new Mercedes-Benz GLC may not be as sharp as Thor in its actions or tough as the mighty Hulk to take on the rough, but what it does best is bringing out a good balance just like Captain America. It’s powerful, can cruise effortlessly while behaving with its body manners and pampers you reasonably well on the inside. And perhaps that’s just what majority of the buyers look for.